The terminology utilized within the Scientific Research and Experimental Development (SR&ED) program can often be confusing. We have been asked to clarify, “what the difference is between refundable and non-refundable investment tax credits (ITCs)?” Claimants understandably want to know how they will receive their SR&ED ITCs. This article examines the difference between the two forms of SR&ED ITCs, refundable and non-refundable, and when they may be received.

A refund as defined in the Merriam-Webster dictionary means “to give back or return in restitution, repayment, or balancing of accounts” and the term nonrefundable means exactly the opposite: “not subject to refunding or being refunded”.1 With these definitions in mind, one would assume that a non-refundable tax credit is a bit of an oxymoron. How can it be non-refundable but also a credit?

The Terminology Within the SR&ED Program

To understand what a non-refundable ITC is in comparison to a refundable ITC within the SR&ED program you must first know what Part 1 Tax is. As stated within the Income Tax Act of Canada, every Canadian resident, and resident corporation, must pay income tax on their taxable income for each tax year.2 This is referred to as Part 1 Tax and is calculated on a corporation’s T2 tax forms for the tax year. “All corporations — including non-profit organizations, tax-exempt corporations, and inactive corporations — have to file a T2 return for every tax year, even if there is no tax payable.”3

The investment tax credit (ITC) of certain claimants (see section 4.1) that is not applied in the year to Part I tax, or carried back to a previous year and applied to Part I tax in the previous year, may be refundable. In this context, the term refundable goes beyond a reimbursement of Part I tax already paid and refers to the credit that is reimbursed to the claimant.5

If the claimant’s Part 1 Tax, the taxes they owe for the year, are reduced to nil, they may be eligible to receive their remaining refundable SR&ED ITC directly to them in cash form.

Non-Refundable ITCs, which the CRA also refers to as ‘not refundable’, are not specifically explained within the SR&ED Investment Tax Credit Policy, however, on the CRA’s How your business can benefit from the SR&ED tax incentives page they have stated: “You can use the ITC to reduce tax payable.”6 Any non-refundable credits a claimant receives are used towards their Part 1 Tax for the year. If their Part 1 Tax is reduced to nil, and there are remaining unused ITCs, they may choose to carry them back 3 years or forward 20 years and apply them against any tax payable for other years7.

The SR&ED Investment Tax Credit Policy states that according to the definition of a refundable ITC in the Income Tax Act and other supporting provisions, only the following types of claimants may earn a refundable ITC:

2) For a CCPC, other than one that is a qualifying corporation or an excluded corporation, the refundable ITC is:

An ITC earned at the basic ITC rate by a CCPC, that is not a qualifying corporation or an excluded corporation, is not refundable.

3) For a CCPC that is a qualifying corporation, but is also an excluded corporation, the refundable ITC is 40% of the unclaimed balance of the ITC earned in the current year for qualified SR&ED expenditures.

4) Generally, for an individual (other than a trust), the refundable ITC is 40% of the unclaimed balance of ITC earned in the current year for qualified SR&ED expenditures.

5) Generally for a trust, each beneficiary of which is either a qualifying corporation or an individual (other than a trust), the refundable ITC is 40% of the unclaimed balance of ITC earned in the current year for qualified SR&ED expenditures.8

The examples below involve an Ontario-based corporation claiming $100,000 of qualified SR&ED expenditures and the use of the proxy method:

Keep in mind the below is calculated after the PPA has been added, and after accounting for the provincial ITCs: 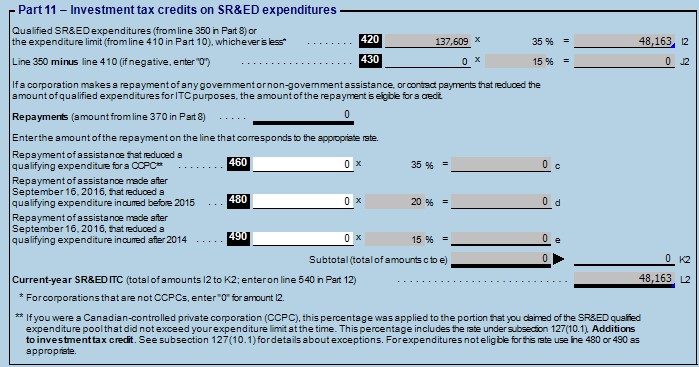 The total refundable amount for qualified corporations is calculated in Line Y2 in Part 14 of Sch 31:

The above example is a CCPC which is a qualified corporation. In this example, the company’s ITCs are calculated as 35% of the total eligible SR&ED expenditures: 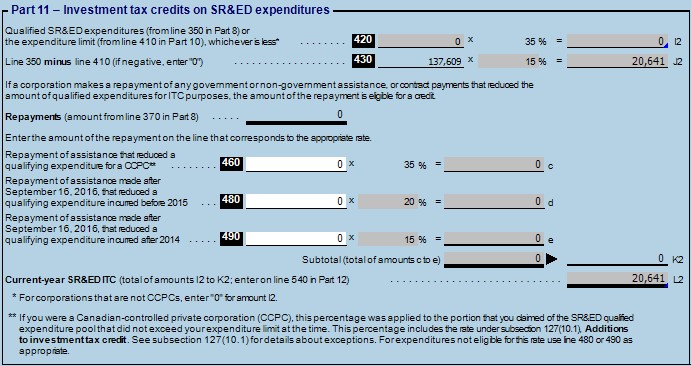 So long as the CCPC’s taxable income is less than the qualifying income limit for that tax year, they will qualify for refundable ITCs. As per the CRA’s SR&ED Investment Tax Credit Policy, It is also important to note that:

Where a CCPC’s qualifying income limit is reduced to zero because the CCPC’s taxable capital is $50 million or greater in the immediately preceding year (see section 4.2.1), the CCPC is not a qualifying corporation and would not be entitled to any refundable ITC.12

The formula to determine a qualifying income limit can be found here. An ITC earned at the basic ITC rate by a CCPC, that is not a qualifying corporation or an excluded corporation, is not refundable. See the CRA’s Types of Corporations page for the full definition of a CCPC to determine whether your company is eligible for refundable SR&ED ITCs.

The credits discussed in this article pertain only to the definition of refundable and non-refundable ITCs, and how they are dispersed at the federal level within Canada. Some Canadian provinces offer their own SR&ED ITC programs that have varying degrees of refundability. See Provincial Tax Credits – Making the Most of SR&ED for details on provincial SR&ED programs across Canada, and whether they are refundable or non-refundable.

Only refundable ITCs may be paid out in cash format if so chosen by the claimant, and any SR&ED ITC that is refunded in the year reduces the ITCs available to carry forward or carry back. Claimants should be sure to confirm the status of their corporation to accurately estimate what their full SR&ED refund will be for the tax year. See Maximum SR&ED refund: Federal Level for a deeper understanding of how the maximize your refundable SR&ED tax credits.