Discussing “On Behalf Of” in SR&ED Contracts What is “on behalf of” when referring to SR&ED contracts?

Contractual agreements, whether between arm’s length or non-arm’s length entities, are a common occurrence in the business world, particularly in SR&ED research. In one of our previous articles, we discussed the disbursal of Investment Tax Credits (ITCs) between entities dealing at arm’s length versus non-arm’s length. Within arm’s length contract agreements, the primary method of determining which entity can lay claim to the SR&ED tax credits is the verification of the concept of “On behalf of”.

For a claimant dealing at arm’s length with the SR&ED performer, “on behalf of” in contractual agreements makes all the difference between a valid SR&ED claim or a rejected one. We will discuss the definition of “on behalf of, as well as factors like contractor performance requirements, pricing vs. risk, intellectual property ownership, etc. – all of which influence ITC entitlement in contracted SR&ED work.

Disclaimer: Contract law is usually a complicated topic. Since various factors influence its application and enforcement, it normally requires expertise to be applied on a case-by-case basis. This article is meant to provide a basic understanding of the subject matter discussed within, and does not serve to replace legal advice. For more insight, please contact a tax lawyer specializing in SR&ED.

Under the Assistance and Contract Payments Policy, a contract payment is:

A contract payment is:

The Concept of “On Behalf Of”

The CRA’s Contract Expenditures for SR&ED Performed on Behalf of a Claimant Policy explains “on behalf of” as the following:

[…] “on behalf of” […] normally refers to a situation where the SR&ED work is contracted out to another party under circumstances where the claimant (payer) typically maintains ownership of the SR&ED work performed.

Is it a Contract Payment for SR&ED?

As listed under the Assistance and Contract Payments Policy, the criteria to determine the validity of a contract are applicable to all claimants regardless of whether the claimant is:

These criteria should be considered in assessing the nature of the payment. The key element to consider is whether the payer is requesting the contractor to perform SR&ED on behalf of the payer under the terms of the contract. An analysis is required of all circumstances relating to the payment to determine if the amount is to be treated as a contract payment.

None of the criteria are, in themselves, conclusive.3

Under this criterion,4 the main question is not whether SR&ED eligible work was carried out, but rather whether or not it was carried out because it was specifically required under the terms of the contract.

Furthermore, did the payer also include specifications for the work contracted which had to be complied with while pursuing the tasks for which the performer was engaged?

In the article discussing arm’s length versus non-arm’s length credit disbursals, we posited that one of the main questions determining eligibility of ITC claim was as follows: which organization bore the brunt of financial risk in the project? The questions posed under this criterion support and reflect that same query.

[A] Is there a ceiling price beyond which the contractor would not have been paid?

[B] Would the contractor have been entitled to payments if the work did not meet the requirements of work to be performed under the contract?

If the answer is yes, it may indicate that the risks taken by the performer were limited. In such a case, the risks rested with the payer, even with a ceiling price clause. This would support the position that SR&ED was carried out on behalf of the payer.

One particular reason behind this could be that if the performer did not comply with requirements specified for the work under the contract, then the payers may find themselves battling the eligibility of the work when the claim is filed. If the performer receives payment regardless of compliance with specific requirements, then the risk is born by the payer and not the performer.

The CRA also notes that a repayment given because the work stopped or the other obligations of the contractor were not fulfilled should not be considered in making the determination.

The rights to the intellectual property (IP) arising from the SR&ED work are an important consideration to keep in mind while determining if a contract was carried out by a performer on behalf of a payer. If the IP belongs to the contractor, it may indicate that the performer did not carry out SR&ED work on behalf of the payer.

However, distinctions can be made in case of a contract with the Crown. The ownership of IP resting with the performer rather than the Crown does not necessarily have a notable effect on the qualification of a payment as a contract payment. This succinctly displays the fact that the ownership of IP is just one factor among many which are weighed during the overall comprehensive analysis of the nature of contract payments.

The CRA further clarifies, under this policy, two particular situations with respect to the IP criteria:

[1] For contracts with the Crown, the Treasury Board of Canada Secratariat’s “Policy on Title to Intellectual Property arising under Crown Procurement Contracts” specifies that IP developed by a performer during the course of a crown procurement contract will stay with the performer.

[2] The second situation deals with contracts with universities, in their capacity as payers. In this case, the university usually owns the rights to the IP. The following questions are considered in the determination of valid SR&ED contract payments.

If the answer to both these questions is yes, then the SR&ED was performed on the behalf of the university.

Contract for Services vs Sale of Goods

While the CRA lists this as the last predetermined factor in the policy, for fulfillment of “on behalf of” under SR&ED contract payments, they haven’t clarified upon the manner in which the presence of either of these factors determines ITC entitlement: “A contract for service may indicate that the SR&ED work was being performed on behalf of the payer. However, a contract for the sale of a good does not necessarily mean that the SR&ED work was not being performed on behalf of the payer.”

While the factors listed above may shed some light on the necessary conditions which must be fulfilled in order to successfully defend your claim to SR&ED work done on behalf of your organization (in your capacity as payer), the CRA itself notes these points to be inconclusive by themselves. This is why, in addition to complying with the points listed above, primary precautions should include specific wording in the contractual agreement which denotes ahead of time which organization between the payer and the performer would claim the ITCs at the end.

Want to estimate your potential refund? Why not try our SR&ED calculator, which allows you to enter contract payments.

On May 14 over 180 SR&ED stakeholders participated in the 2020 SREDStakeholder webcast.  A variety of topics were covered including SR&ED Medical issues, SR&ED statistics and success stories, impacts of COVID-19, CATA 2020 SR&ED initiative, Read more…

Here at SR&ED Education and Resources, we are always looking for ways to inform our readers about potential SR&ED.  Did you know that if you are paying (non-refunded) service fees (i.e. levy or check-off) to an Read more… 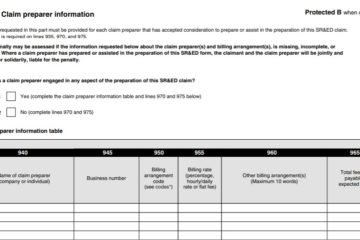 When applying to the Canada Revenue Agency for Scientific Research & Experimental Development (SR&ED) investment tax credits, the information you provide in each section can ultimately decide its fate in the hands of a Read more…