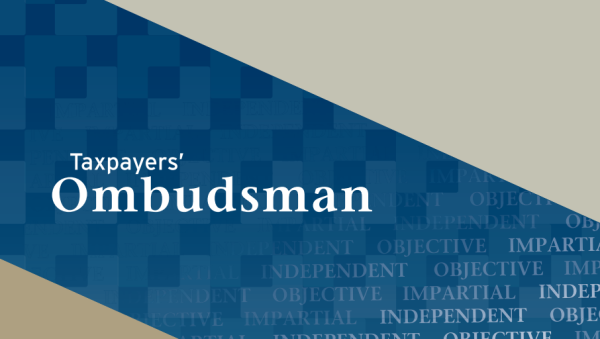 Expectation vs. reality — is the Taxpayers’ Ombudsman really effective?

We have previously discussed the scope of the Taxpayers’ Ombudsman (OTO) and how to use the OTO to file a complaint regarding the service of the Canada Revenue Agency (CRA). This post analyzes the OTO’s annual reports to see how effective they really are at resolving taxpayer issues.

As a reminder, the OTO’s mandate is to provide an “independent and impartial review of unresolved complaints from taxpayers about the service or treatment they have received from the CRA.” 1

Each year, the OTO publishes an annual report that summarizes the office’s work over the past year, including trends in taxpayer complaints, current and foreseeable issues within the office, details of resolved files (with confidential information redacted), and statistics regarding files handled. The Ombudsman then submits this report to the Minister for National Revenue.

IMPORTANT: We did not include charts for two of the reports. There simply was no summary chart made for the 2008-09 report,2 and we found the information/wording in the 2010-11 file summary chart too convoluted to be useful for our analysis.3

Trends in the Number of Files Opened and Closed

The Annual Report for the 2016-17 fiscal year includes information for the closed files that, similarly to the report for 2010-11, is very convoluted. A simplification of the information included in the 2016-17 report is as follows: 4

Sherra Profit, the Ombudsman in 2017, stated that “outreach, as well as speaking engagements at conferences, has increased the visibility of my Office and the understanding taxpayers have of my role as the Taxpayers’ Ombudsman.” 6 We also reported in June 2017 that the CRA was “cracking down” on SR&ED claims. This may be related to claims made by Profit in December 2017, that the CRA had been rejecting documentation without explanation, and that “issues around validating eligibility for benefits and tax credits are among the top complaints [the Ombudsman] receives.” 7 An increase in the OTO’s visibility, and the CRA’s apparent reluctance to accept valid forms of documentation in an attempt to “crack down” on the SR&ED program and in other taxation matters, may have contributed to the increase in complaints to the OTO in 2017.

Inconsistencies in the presentation and reporting of information in the reports, regarding the number of files closed for each year, does not allow accurate, direct comparisons to be made between the 2015-16 and 2014-15 years reported.

The 2014-15 figures helpfully show the figures for the previous reporting year, 2013-14, however, the difference in the numbers between 2013-14 and 2014-15 are drastic, and claims opened and closed both display falls of over 1,000 claims. The OTO explains the drastic decrease in non-mandate claims as being due to: 11

[…] an influx of complaints from taxpayers or their representatives related to tax-shelter donation schemes and the closure of the CRA’s in-person counter services. We received over 1,000 complaints from taxpayers voicing their frustration toward the disallowance of their donations in a given year as a result of the arrangement they entered into with the recipient organization. However, this issue was legislative, not service-related, and therefore, did not fall within the mandate of our office.

How do these years compare to previous Taxpayers’ Ombudsman’s Annual Reports? 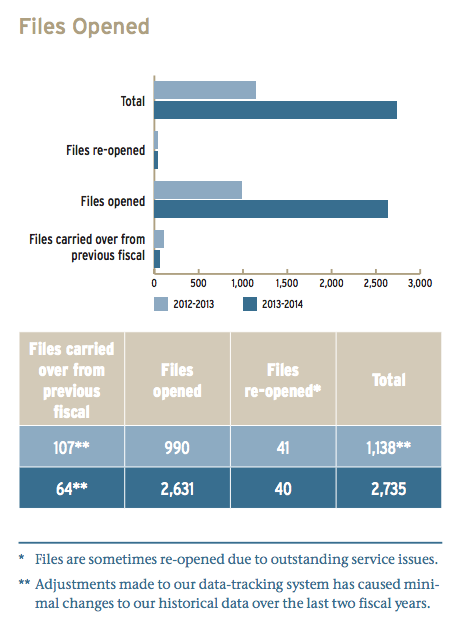 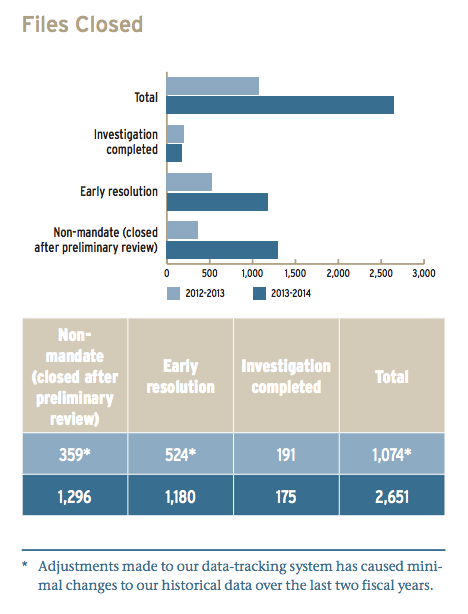 The Taxpayers’ Ombudsman explains this increase in its 2013-14 report as follows: 14

[The Office of the Taxpayers’ Ombudsman] have seen an increase in complaint volumes, and when combined with the statistics on our website traffic and of our media coverage, it suggests that Canadians are steadily becoming more aware of our presence and relevance to them.

The way figures were presented prior to 2013-14 also differs from year to year. The practice of displaying figures for current and previous years first appeared in the 2012-13 report (below). 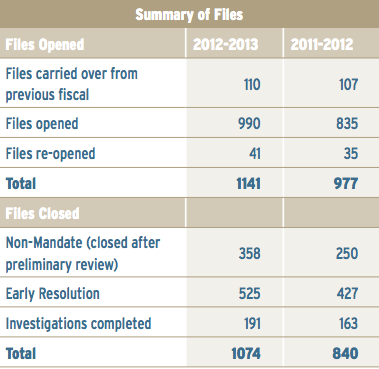 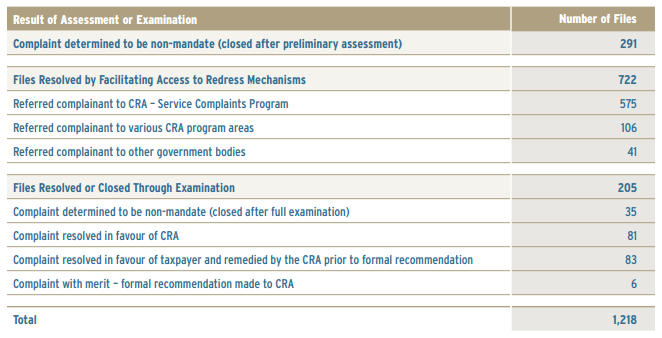 The table does not show how many claims were opened in the year, however, this information is provided in the report and states: 18

Vague Language: What is a “Resolved” File?

While these charts are a helpful tool for seeing the influx of complaints received by the OTO and the number of files dealt with, the varying terminology makes it difficult to properly assess the OTO’s effectiveness.

The 2014-15 report featured information regarding the “top complaints heard by the OTO” and stated: 19

These trends […] do not take into account how the complaints are resolved. It is important to note that even though a trend is identified, it does not mean a systemic problem exists or a systemic investigation will necessarily be undertaken.

As noted in our “when to use the Taxpayers’ Ombudsman” post, taxpayers are expected to clearly state their ideal resolution when filing their complaint, however, what constitutes a resolution on the OTO’s terms? Resolutions may include an apology from the CRA, access to a service that was previously denied/withheld, etc. This makes the potential range of possible “resolutions” rather large and stating that complaints were “resolved early” is vague. Are there metrics to assess how satisfied a taxpayer is with the resolution? How often is one type of resolution reached versus another type of resolution?

One of the few examples of specificity regarding types of resolution can be found in the 2008-09 annual report: 20

Formatting inconsistencies between the OTO’s annual reports mean that the types of statistics provided in one year are not necessarily provided or expressed using the same terminology the next year.

Issues with the Taxpayers’ Ombudsman

While the OTO is, in theory, an excellent resource available to taxpayers frustrated with the CRA’s complaints process, the OTO is also aware of discrepancies between their mandate and what taxpayers interpret their mandate to be.

The following are excerpts from various annual reports:

As these excerpts indicate, taxpayers may confuse or even conflate the roles of the CRA and the OTO, while the CRA may feel they are in a disadvantaged position (i.e. “the bad guy”) if the OTO investigates a complaint.

In 2010 the OTO conducted research to investigate why more taxpayers were not filing formal complaints. Its results showed that the number one reason (28% of respondents) found that there was too much “hassle” involved in complaining about tax issues.24

Why aren’t taxpayers filing formal complaints with the OTO? 25

In 2016, however, the Auditor General, Michael Ferguson, stated that the CRA was, “failing to deal with income tax objections from hundreds of thousands of Canadians in a timely manner and that taxpayers [were] never told how long it will take to make a decision on their file.” 26 This could be one of the primary factors in the stagnation in the number of cases brought to the OTO, as taxpayers must exhaust the CRA’s complaints process before bringing the issue to the OTO.

Observation Paper: Issues of Service and Fairness Within SR&ED

In December 2011, the OTO released an observation paper on service issues within the Scientific Research and Experimental Development (SR&ED) tax incentive program. Rather than being an official report, the OTO had to issue their informal findings as an observation paper based on the following recurring issue in their public opinion research: 27

Although we heard numerous accounts of discontent with the SR&ED program among claimants, we were unable to validate many of the criticisms due to a lack of complaints to investigate.

[…] despite our best efforts to encourage these claimants and their representatives to file complaints so that we could investigate the merits and potential causes, most did not do so.

One obvious reason for this unwillingness to file complaints is that the OTO’s mandate simply does not address the concerns that many SR&ED claimants have: 28

Many of the complaints and representations we received from claimants focused on the CRA’s interpretation or application of the legislation and policies governing the SR&ED program.

Taxpayers were concerned that the CRA was focusing too much on auditing rather than on supporting innovation, that there appeared to be inconsistencies in review policies between different regions of the country, etcetera.

Despite the fact that most complaints were about SR&ED legislation and policy, the OTO can only investigate complaints that involve one of the eight service-related rights under the Taxpayers’ Bill of Rights, including “the right to expect the CRA to be accountable.” (For a full list of service-related rights, please see our post on the OTO’s mandate.)

As stated above, the Taxpayers’ Ombudsman is, in theory, a useful, worthwhile institution that can serve as a last resort for frustrated taxpayers. However, the varying presentations of published information make it difficult to truly analyze the work of the OTO and how they benefit taxpayers. While the Taxpayers’ Ombudsman has done some public outreach to inform Canadians about their rights as taxpayers and the role of the OTO, it is clear that a great deal of work still needs to be done to increase public confidence.

This article is based on Office of the Taxpayers’ Ombudsman (OTO) policy documents available at the date of publication. Please consult the OTO website for the most recent versions of these documents.