What is a “specified employee” in SR&ED, and how does the understanding of this term impact an SR&ED claim?

Small businesses account for just under 97.9 percent of all firms in Canada,1 and out of the 1,198,632 small businesses within Canada 1,163,027 (97%)  belong to a corporation with fewer than 50 full-time employees.2 This suggests that in the small organizations claiming tax credits under the Scientific Research & Experimental Development (SR&ED) Program, specified employees are likely to be directly engaged in SR&ED work themselves.

According to paragraph 251 of the Income Tax Act, individuals connected by a blood relationship, marriage, common-law partnership or adoption are related persons. These relationships include parents (biological, legal or parents of a spouse), partners, children (biological, adopted or common-law), children’s partners (until the death of child or divorce), brothers and sisters (siblings or siblings-in-law), descendants (grandchildren, etc.), but do not include nieces, nephews, uncles, aunts or cousins.6

Even though this term is not included in the definition of specified employees, its consideration is important due to its effect on SR&ED expense claims under salaries or wages for specified employees. An expenditure on SR&ED work is made with respect to an expense for the salary or wages of an employee who is directly engaged in SR&ED in Canada. Therefore, SR&ED expense claims can only include the portion of an employee’s work that can reasonably and directly relate to SR&ED.

Whether an employee is directly engaged in SR&ED is based on the tasks that they perform and not on their job title. Directly engaged refers to “hands-on” work. Generally, employees (including managers and supervisors) conducting experimentation and analysis in the performance of basic research, applied research or experimental development (or when performing support work that is commensurate with the needs of the SR&ED project) are considered to be directly engaged in SR&ED.

Managers and supervisors who supervise the ongoing SR&ED work are also considered to be directly engaged in SR&ED when they are directing the course of the ongoing SR&ED work or when they are providing direct technical input into the SR&ED work. Non-technological management activities or decision-making functions that do not directly influence the course of the SR&ED, even if they relate to the SR&ED, are not considered direct engagement with SR&ED.7 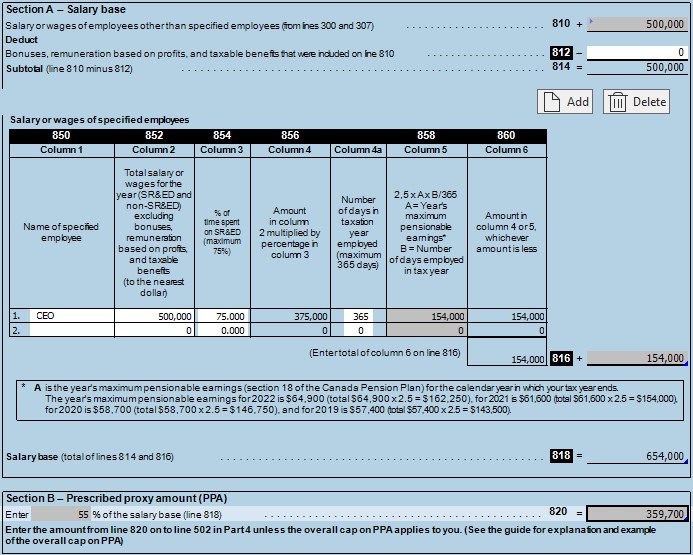 The Income Tax Regulations restrict the amount (“salary cap”) that a claimant can include in the salary base for a specified employee when using the PPA to the lesser of the following amounts:

The formula to determine the maximum amount that a claimant can include in the salary base for a specified employee for the year if using the PPA, in other words, for the second limit mentioned above, is:

A is the YMPE for the calendar year in which the tax year ends.

B is the number of days in the tax year that the claimant employed the individual.8

The Canada Revenue Agency (CRA) sets the YMPE each year and within the SR&ED program, these amounts only apply to the specified employees in order to calculate the salary base. Non-specified employee salaries or wages are unaffected by these limits.9

In this example, the maximum amount of salary that can be claimed in the salary base is $154,000 because it is the lesser of the two numbers. 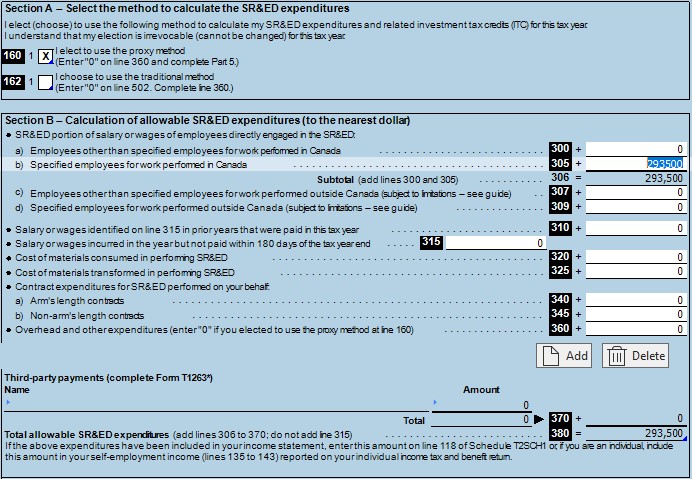 On the T661 Line 305 follows different rules for the maximum claimable amount for a specified employee, regardless of which method is chosen.

The amount that a claimant can claim as an expenditure on SR&ED for salary or wages of a specified employee is subject to a limit (salary cap). The salary or wages is limited to five times the Year’s Maximum Pensionable Earnings (YMPE) as determined under section 18 of the Canada Pension Plan and prorated for the number of days on which the claimant is a specified employee during the year.10

Disallowance of Bonus from SR&ED Claim

As can be surmised from the information above, an SR&ED-related expenditure carried out in Canada does not include any bonuses or remuneration based on profits paid to a “specified employee.” If a corporation pays or accrues a bonus to an employee who is a specified employee, the bonus is not an expenditure in respect of SR&ED.12

The good news is that bonuses or remuneration based on profit for non-specified employees can be included in salary and wages for SR&ED.

Paragraph 251(2)(c) provides that two corporations will be related if:

Considering the smaller size of most SR&ED organizations, it is crucial to understand the treatment of specified employees under the various policies of the CRA.

If a specified employee is on the payroll of two or more associated corporations, neither corporation will be able to add this employee’s expenses to their claims until they fill and submit Form T1147,16 through which they will allocate the employee’s capped expenses across the various organizations.

This article is based on CRA policy documents and an income tax folio available at the date of publication. Please consult the CRA website for the most recent versions of these documents.

Do you have experience trying to claim for employees who were directly engaged in SR&ED, who were also “specified employees”?