In March 2009, a Government of Canada Policy Research Initiative entitled “Market Impacts on Canadians of Different Kinds of Science and Technology Investments by the Canadian Federal Government” was published. This report reviewed the existing empirical work that evaluates the effectiveness the government’s various science and technology investments, including the Scientific Research & Experimental Development (SR&ED) tax credit.

The study distinguished between three federal policy measures: R&D tax incentives (about $4.7 billion in 2008), grants, contributions, and contracts for R&D (about $3.5 billion in 2006/2007), and R&D performed in public research organizations (about $2.2 billion within the federal government and about $2.5 billion at post-secondary institutions in 2006/2007). Examining SR&ED, the authors noted that “the Canadian federal government is one of the most generous providers of R&D tax incentives, especially for small firms.” 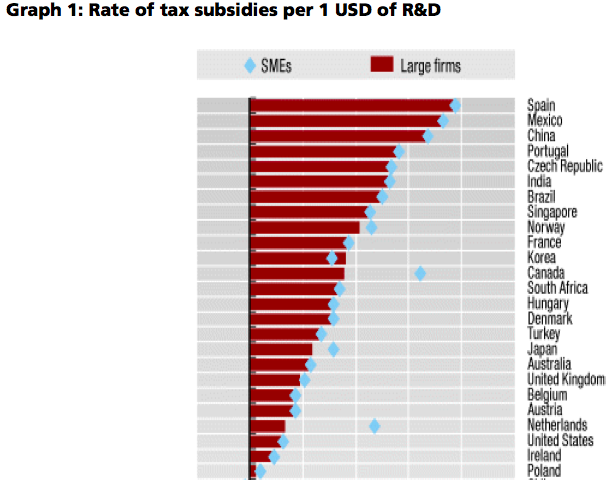 Graph courtesy of the Government of Canada.

After reviewing each category, the authors concluded that “[i]n all three cases, it is hard to detect a direct effect of these investments on growth or productivity.” However, they did note that tax incentives such as SR&ED do add value.

“There seems to be some additionality in terms of business R&D in the case of R&D tax incentives,” they said. “There are also signs that direct and indirect public funding of R&D…leads to behavioural additionality, i.e. increased innovation, collaboration, persistent innovation.”

The authors also suggested that to effectively spur R&D, each category should be implemented concurrently.

“This means coordination among different policies and consistency in public support from basic research to the commercialization stage,” they said.

This article is based upon a report issued at the time: Market Impacts on Canadians of Different Kinds of Science and Technology Investments by the Canadian Federal Government.