Company Project vs SR&ED Project: Not The Same Company Project vs SR&ED Project: Not The Same

Given the critical importance of correctly separating activities/expenses between SR&ED work and routine commercial endeavours before filing a claim, we will discuss:

Characteristics of an SR&ED Project: The Why and How of SR&ED

According to the Guidelines on the eligibility of work for scientific research and experimental development (SR&ED) tax incentives1, the SR&ED eligibility of a project is determined by the “Why” and “How” of the project.

Work must be conducted for the advancement of scientific knowledge or for the purpose of achieving technological advancement (contained in paragraphs (a) to (c) of the definition). The key to both is the generation or discovery of knowledge that advances the understanding of science or technology. The type of knowledge in this context is conceptual knowledge, such as theories or prediction models, rather than just factual knowledge, such as data or measurements.2

The “How” requires that the work must be systematic as contained in the definition of SR&ED and that while many businesses follow their own practices, and while these are often systematic it may not be enough. The Guidelines state:

It is important to distinguish between a systematic approach to carrying out work and the approach that is a systematic investigation or search called for in the definition of SR&ED. The latter approach includes:

As noted in the Guidelines on the eligibility of work for scientific research and experimental development (SR&ED) tax incentives certain categories or work are considered ineligible for SR&ED. The categories include:

These categories of work are referred to as exclusions and cannot be claimed. The guidelines state:

Excluded work should only be considered after you have identified that eligible work has been performed. This could mean that even if some of your work falls in the excluded categories, you may still have other work that is eligible. For example, your business may be conducting SR&ED while at the same time prospecting for minerals.6

Not all of the work performed within a project will necessarily fall within the scope of an SR&ED project, but it is possible that even if some of your work falls in the excluded categories, you may still have other work that is eligible. The Guidelines on the eligibility of work for scientific research and experimental development (SR&ED) tax incentives state:

Any work that is commensurate with the needs and directly in support of basic research, applied research or experimental development work undertaken in Canada, falls within the meaning of SR&ED and can be claimed as part of the SR&ED project.7

While not all work is eligible for SR&ED, if it is commensurate with needs and directly in support of the SR&ED project then it may be classified as support work and the associated costs may be claimed.

Differentiating Between Company and SR&ED Projects

While the references to company projects’ vs. SR&ED projects’ are no longer a part of the CRA’s eligibility guidelines, as they were within the archived Eligibility of Work for SR&ED Investment Tax Credits Policy, defining how an SR&ED project differs from a company project remains essential in order to make certain your SR&ED claim is completed properly. 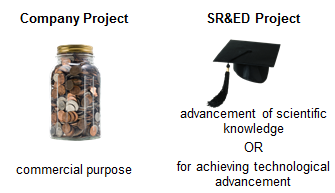 There is often confusion regarding the differences between SR&ED projects and company projects, especially during the process of separation and allocation of funds while filing a claim.

The CRA attempts to establish a clear understanding of what an SR&ED project involves.

SR&ED work bears very different objectives from the routine commercial endeavours of the company. While SR&ED attempts to achieve a technological or scientific advancement, a company project aims at enhancing an organization’s commercial and business standing. As per the characteristics of an SR&ED project, the key point is whether the work has the characteristics to meet the definition of SR&ED and not the overall goals in a commercial sense.

Thus, barring certain exceptions, the SR&ED project will usually be undertaken as a subset of a company project undertaken by the claimant organization.