On February 27, 2018, the Liberal federal government Finance Minister, Bill Morneau, released the 2018 Budget.1 Prior to its publication, speculation across the media suggested that the budget would focus on gender equality, indigenous infrastructure, science and innovation, cyber and environmental security, and the government’s deficit.2

This is the earliest the federal budget has been released since 2014. The previous release dates are as follows:

There seems to be no correlation between the date of publication of the budget and its effects on business, and specifically, the SR&ED program, as the most recent changes to the SR&ED program were announced in the 2012 and 2013 federal budgets.

The 2017 budget mentioned the SR&ED program under the broader umbrella of “closing tax loopholes” and sought to “clarify the intended meaning of “factual control” under the Income Tax Act for the purpose of determining who has control of a corporation in order to prevent inappropriate access to supports such as […] Scientific Research and Experimental Development Tax Credit for small businesses.” 3 There was, however, a focus on innovation and how this can be nurtured in Canada. The 2017 budget suggested there would be a “whole-of-government review of business innovation programs” with the aim to provide Canada’s innovative communities with “simple and effective” programs that best suit their needs.4

The 2017 Innovation and Scientific Review

The review referred to in the 2017 Budget was conducted by a panel led by David Naylor, a professor at the University of Toronto. The report – Investing in Canada’s Future: Strengthening the Foundations of Canadian Research – is colloquially known as the Naylor Report and made several recommendations to government as to how they can improve scientific and innovative research initiatives in Canada.

The report favoured direct subsidies for research and development (R&D), and suggested that Canada’s lack of Business Enterprise Research and Development (BERD) is due to its “reliance on SR&ED tax credits.” The Naylor Report also states that the 2011 Jenkins Report led to a substantial reduction in SR&ED funding; however, it does not acknowledge the impact of the direct subsidy programs introduced as a result of the Jenkins Report and their effects on Canadian innovation.5 A similar conclusion is drawn by the Naylor Report in relation to Canada’s Gross Domestic Expenditure on Research and Development (GERD) – that, effectively, Canada has been falling behind its G7 peers as “Canadian businesses receive indirect funding from the government through tax credits, such as the SR&ED tax incentive.” 6

Although the Naylor Report attributes the decline in Canadian innovation to the SR&ED program’s indirect nature (as it provides funding through tax relief, not funding through direct subsidy), it should be highlighted that the report refers to 2014 as the year that the decline began, and this is also the year when funding for the SR&ED program was its lowest in seven years.

The Federal Budget 2018 is notable in that the Liberal majority government listened to and implemented the concerns of some in the business community. For instance, the Information Technology Association of Canada (ITAC), a national information and communications technology business association, published a pre-budget submission last summer calling for measures that would allow Canadian companies reliant on SR&ED tax incentives to better scale their businesses and grow from small and medium-sized companies.

The Budget has addressed ITAC’s recommendations, at least partially, by noting that:

To better support Canada’s innovators, Budget 2018 proposes to provide $2.6 billion in incremental support over five years. In addition to new funding, Budget 2018 announces measures that will transform Canada’s innovation programs—making them easier to access and to use, and expanding support for Canadian companies that want to scale up and sell their innovations in the global marketplace.7

The Budget Plan also carries forward an element announced in Federal Budget 2017, by noting that “Five innovation superclusters have been announced, selected from competing proposals from across Canada. When small, medium-sized and large companies, academic institutions and not-for-profit organizations come together to generate bold ideas, the results are more good, well-paying jobs for Canadians, and groundbreaking research that benefits everyone.”8

In addition, the budget document also notes that several initiatives have been launched to support innovation and businesses in Canada:

Innovation Canada was launched in January 2018 to provide a single point of contact for Canadian innovators and entrepreneurs looking to grow their businesses. This innovative interface is an entrepreneur’s gateway to government programs and services (including at the provincial and territorial level). The tool generates targeted results, connecting businesses with exactly the resources they need.

This past year, the Government also launched a range of funds and initiatives aimed at supporting Canadian businesses that want to grow and create more good, well-paying jobs: What is striking about this Federal Budget is that it is only now implementing many of the recommendations of the Naylor Report, published in April 2017, despite the fact that the government reportedly had a draft version of the report in its possession as early as January 2017. 10

In the past year, the Government of Canada received the report from the expert panel on Canada’s Fundamental Science Review, led by Dr. David Naylor. While Canada spends more on higher-education research and development (as a share of gross domestic product) than any other Group of Seven (G7) country, the Review identified a number of challenges that require urgent attention. These include declining funding per researcher and the need to fundamentally shift how, when and where Canada invests— encouraging more global collaboration, fostering more interdisciplinary research, and better supporting research that has the potential to be groundbreaking. The Review also identified a need to focus on the next generation of researchers, including students, early-career researchers, and a science community that looks more like Canada—more diverse, and with a greater number of women. 11

The Government is also designating four flagship “platforms” to streamline funds and programs to “focus on providing the customized support that Canadian businesses need to succeed and grow.”12

The following tables outline how the “innovation program suite” will be streamlined:13 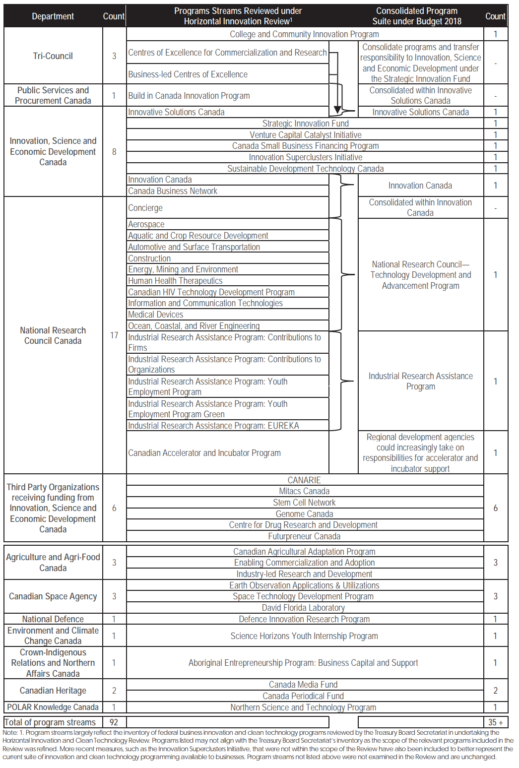 While SR&ED is not mentioned in this Budget, one of the more popular direct R&D funding programs will have its budget increased by $700 million over the next five years:

To help Canadian entrepreneurs and small business owners develop innovative technologies and successfully commercialize them in a global marketplace, the Industrial Research Assistance Program (IRAP) offers flexible funding along with consulting services. IRAP has proven to be an effective resource for growing Canadian companies and innovative entrepreneurs. This program is well positioned to support funding for larger projects above the current contribution threshold of $1 million.

To enable IRAP to support business research and development for projects up to a new threshold of $10 million, the Government proposes to invest $700 million over five years, starting in 2018–19, and $150 million per year ongoing. This funding will support hard-working Canadian entrepreneurs to create jobs as they grow and expand their companies.14

Additionally, changes will be made to the Strategic Innovation Fund as the federal government moves from funding smaller projects to larger ones in an effort to create more jobs:

To allow for more focused support for business research and development projects over $10 million, the Strategic Innovation Fund will move away from supporting smaller projects to support larger projects that can lead to significant job creation and shared prosperity for Canadians. The Fund’s role in facilitating the growth and expansion of firms and attracting large-scale job-creating investments will remain unchanged. At the same time, the Fund’s role in advancing research and development through collaboration between academia, not-for-profits and the private sector will be expanded.

The granting councils currently host two programs targeted at promoting large-scale business-academia collaborations that have proven to be effective in helping firms grow to create jobs and prosperity for Canadians. In order to modernize these programs and make them more accessible for businesses, the Government will consolidate the Centres of Excellence for Commercialization and Research and the Business-led Networks of Centres of Excellence programs and transfer responsibility for these programs and associated funding to the Strategic Innovation Fund.15

One of the agenda items of this federal budget is increasing the role of women and those from diverse ethnic backgrounds in entrepreneurial roles. To that end, the Budget notes, particularly in the role of women, that:

Women entrepreneurs also depend on fair and efficient access to the entire suite of federal business innovation programming, from research and development support all the way through export programs.

The only outstanding question is in what form will these opportunities come to pass for women entrepreneurs. Will innovation programs deliberately screen out men from participating? The Budget is vague on the implementation details and has several curious line items, such as the following:

If there are any surprises from this year’s Federal Budget, it is that the funding for certain programs has increased while efficiencies are being proposed. Also of note is that the federal government has listened to the concerns of (some) business and academic communities, implementing many of the changes recommended by both the Naylor Report and ITAC’s pre-budget submission almost verbatim. While SR&ED is not explicitly mentioned in the Budget at all, one wonders if the federal government is taking more of a cautious approach at the moment and will make changes to the program next year. It seems that 2018 Federal Budget might be more of a performance evaluation budget — one that the Liberal majority government is using as a future baseline to measure the success of innovation programs. That certainty will only become apparent over the course of the next year, so it will be very interesting to watch how this new focus on innovation will materialize.

The link to the budget is here. What do you think of it?
Read a summary of previous federal budgets by clicking here.